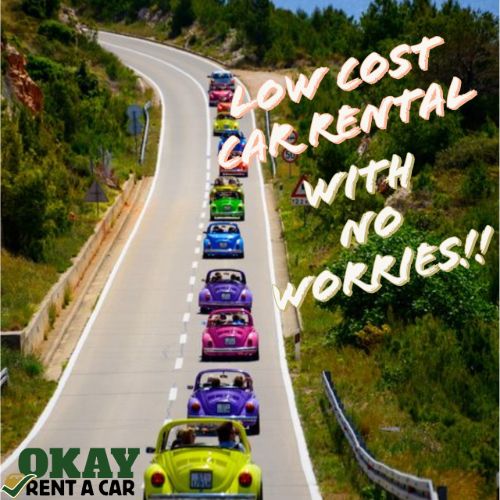 Don't forget to inform OKay rent a car, on Crete about the age of your little ones and book the baby seat. Rent a car in Anissaras from Okay rent a car and start to explore the beauty of Crete.
If you choose Anissaras for your summer holidays in Crete, your economy rental car can also be delivered to any of the hotels, villas or apartments to move around anywhere in central Crete and visit many Cretan beautiful villages and the gorgeous beaches of the island.

Anissaras is located 22 km east of Heraklion and 1 km west of Hersonissos. The area of Anissaras is part of the unique stretch of the Cretan coastline from Kokkini Hani to Malia.
Anissaras is neither a village nor a town – it’s a place – a large, hilly area that springs up just outside of Hersonissos, a stone’s throw away. But the difference between the two is like night and day. Actually, some people refer to it as Hersonissos’ high-class suburb.
There are no bars, no nightlife – outside of the hotels in Anissaras, which are mostly upscale and self-contained. However, there are a few smaller hotels and several tourist apartments in the area. All in all, it is a place for a quieter vacation, yet close to the raucous Hersonissos hot spots.
Therefore Anissaras is an ideal place to collect your hire car and start your tour around the island to discover and explore the magnificent of Crete.
Okay, car hire in Anissaras gives you the chance to find discount car rates and a fleet of new and well equipped rental cars for your summer holidays in Anissaras, Crete.
At OKay rent a car, car rental in Anissaras, we offer great prices on all car types such as economy cars, LPG, family cars, jeeps, cabriolet, mini-vans, diesel, automatic cars, SUV. With a multilingual call centre open 7 days a week, 24 hours a day and 39 years of experience, we assure you the best car rental service in Anissaras Crete. The magic of the seafloor and the diving experience into such a familiar yet unknown world -the sea world of the Mediterranean - cannot be described in just a few words.  A must-see place especially If you travel with kids.

Dinosauria Park started as an idea in 2013 and was first housed in GOURNES ΔΕΚΚ, located in the former American Base. There were hosted 30 different dinosaur species from all periods of the Mesozoic era and other prehistoric animals. In 2014 the exhibits were transferred to their own space, following intensive efforts to be found in their natural environment and to "revive"! In the large family of dinosaurs new species were added and new sections, such as dinosaurs General Hospital, where young and old fans of dinosaurs can see a dinosaur hatches and begins his life in the park. In the space for creative activities, all become children again, trying to find as many dinosaurs may in a tidal area, and playing various "dinosaur games" made in space.

For the visitors, there is the opportunity to watch themed films released in 5D and 7D Cinema.

One of the most important gorges of Eastern Crete is Aposelemis Gorge which is located near Chersonissos. The Aposelemis river runs along the bottom of the gorge and springs from the Lasithi Plateau flowing into the sea between the areas of Analipsis and Kato Gouves in the Municipality of Chersonissos. The name Aposelemis (Abou Selim) is one of the few Arabic words that are still preserved in Crete. Probably, it was the name of an Arab who acted in the region during the Arab occupation. It is a small but impressive gorge in a picturesque landscape of natural beauty and dense vegetation. Aposelemis Gorge starts from the area of Agio Pnevma (Holy Spirit) at Xerokamares on the provincial road of Chersonissos - Kastelli and reaches up to the height of the village Agriana, in the area of Analipsis. It is 4 km long and its direction is from South to North. At Xerokamares, the visitor can see the imposing remains of the ancient aqueduct of the area that supplied Chersonissos with water.

Gournes is located 15 kilometres east of Heraklion, after Kokkini Hani and before Gouves of the Municipality of Hersonissos. It is located at an altitude of 20 meters, on the main road to Agios Nikolaos. The area of Gournes is located in a large fertile plain and the main occupation of the inhabitants is agriculture. In this region, olive oil, wine, raisins and vegetables are produced. The area is full of small hotels, as well as apartments, rooms to let and modern tourist businesses. In the beautiful area of Gournes, there are many places where one can go and enjoy food, coffee, raki, drinks or anything else they want by having a nice time and having fun simultaneously. Along the road of the beach, there are several small sandy beaches with crystal clear waters being organized and having lifeguards.

Kokkini Chani is a coastal tourist resort, 14 km east of Heraklion, which is part of the Hersonissos Municipality. The inhabitants are primarily engaged in tourism and agriculture. The tourism sector has grown rapidly in this area over the last decades. There are supermarkets, seasonal shops, cafes and taverns on the main road that passes through the village.

The cave of Skoteino is located in the Municipality of Chersonissos, 23km east of Heraklion and 1 km northwest of Skoteino village at an altitude of 225m. The cave of Skoteino is one of the most important caves in Crete, from a speleological and archaeological point of view. The worship use of the cave from 1900 BC to at least the 4th AD century is confirmed through the excavation findings.

Hersonissos is a village with narrow, picturesque alleys, stone-built houses with beautiful courtyards full of flowers, old wells and stone ovens. Walking through the stone alleys and observing the traditional settlement with the characteristic examples of Cretan folk architecture, one enjoys a walk-in this enchanting traditional village.

Piskopiano is a traditional settlement at the foot of Mount Charakas and is located between the villages Chersonissos and Koutouloufari. Piskopiano is set in an amazing location with a panoramic view of the cosmopolitan beach of Chersonissos and of course the sea and sky that spread forward.
In Piskopiano, the tradition is revived through the picturesque narrow streets that cross the traditional neighbourhoods, with the beautiful stone-built houses where simplicity and Cretan architecture prevail.

Koutouloufari is located near Chersonissos Port and is built on the slope of Mount Pyrgia at an altitude of 100 meters and is 29 km east of Heraklion. Koutouloufari is a beautiful and traditional settlement.

Take your rented car from Okay rent a car and drive to Knossos Palace. It is about 30 minutes drive to arrive in Knossos. Visit the place where Minoan civilization flourishes and wander through the Labyrinth, trying to reveal the myth of the Minotaur.

Cars for rent in Anissaras

Book with Okaycrete your hired car in Anissaras, Crete, Greece.

Book early and earn from the lower auto rental rates for early bookings. Book with confidence because ✅ we don't need a credit card, ✅ we have a free cancellation policy, ✅ we don't keep deposit, ✅ Our prices are final and there are no extra charges, ✅ Coverage is unlimited, including glass, mirrors and tires, ✅ Theft and fire insurance are also included. Book now and pay later, block your car and avoid last-minute disappointment. Reserve your bus tours around the island of Crete, your cruise to Santorini with confidence. We are a local travel agency with over 30 years of experience in the section of tourism. Our goal is to show you breathtaking views, to visit with you picturesque villages, to chill out with you at the long sandy beaches, and make you feel the Cretan hospitality. No matter if you are adventure type or culture type or shopping maniac type, we have the right trip for you at the most competitive prices.

Find useful info for your trip to Crete.