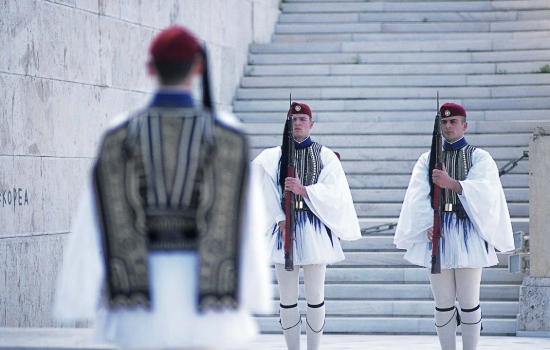 
2021 marks the 200 years anniversary of Greek Independence that occurred on 25th March 1821. This day marks the commencement of the Greek people’s successful struggle against the Ottoman Empire (1821-1830), which culminated in the establishment of an independent state. Along with its national connotation, it is traditionally commemorated also as the religious day of Annunciation. It is one of the focal points of European history in the 19th century, as it marks the beginning of the end for the Ottoman Empire. The Independence War actually started a few days earlier from the 25th of March. King Othonas suggested in 1838 that the commemoration of Independence Day will be celebrated the same day as the religious event of Annunciation. The organization of the revolution started with a gathering in Andrew London's house on 26 - 29 January 1821 in Vostitsa (now known as Aigio). In order not to be suspected by the Turkish authorities of the city, they told them that the gathering at London's house concerned the settlement of land disputes between two monasteries in the area, the Monastery of the Great Cave and the Monastery of Taxiarches. Papaflessas, as an envoy of the Greek organization Filiki Eteria (it translates as friendly society - founded in 1814 in Odessa, Russia, by Nikolaos Skoufas, Emmanuil Xanthos, and Athanasios Tsakalov), was the one that presented to the gathering the Alexander Ypsilantis (the leader of Filiki Eteria) idea for revolution. The locals were not sure if they had the time to organize the revolution and were surely not convinced that the Russians would help. Papaflessas’s attitude expressed the determination of a truly revolutionary and they were finally convinced to agree to start either on the 23rd of April or the latest on 21st of May. Peloponnese was the chosen place as it had a compact Greek population and very little Turkish military presence.

The revolution started a few days earlier, on the 21st of March with the siege of Kalavryta. 5 days later they won. The next attack that strengthened the revolution was on the 23rd of March in Kalamata. The people of Mani under the guidance of Elias Mavromichalis arrived outside the city of Kalamata on the 22nd of March and managed to make the Turkish ruler hand over the city and the Turkish armaments by noon of the next day. After this accomplishment, the Messinian Senate sent a proclamation to the European public, announcing that the Greeks revolted for their freedom.

One of the highlights of the Revolution of '21, during which the strategic mind of Theodoros Kolokotronis emerged was the siege and the fall of Tripoli. Tripoli held a strategic position and was the administrative centre of the Ottoman Empire in Peloponnese meaning that it was a dangerous enemy base, which if not neutralized would be a constant threat to the rebellious provinces of the Peloponnese. In April, it was decided to block the city in order to cut off all communication and supply possibilities. By early May they had surrounded Tripoli. The two major defeats suffered in Valtetsi (May 12th) and Doliana (May 18th), not only revived morale in the Greek camp but also contributed catalytically to the Fall of Tripoli. On the 23rd of September 1821, the Greek revolutionaries entered the city and within 2 hours they managed to reclaim the city.

The first regions to revolt in Central Greece were Phocis (24 March) and Salona (27 March). In Boeotia, Livadeia was captured by Athanasios Diakos on 31 March, followed by Thebes two days later. When the revolution began, most of the Christian population of Athens fled to Salamis. The initial Greek successes were soon put in peril after two subsequent defeats at the battles of Alamana and Eleftherohori against the army of Omer Vrioni. Another significant loss for the Greeks was the death of Diakos, a promising military leader, who was captured in Alamana and executed by the Turks when he refused to declare allegiance to the Sultan. The Greeks managed to halt the Turkish advance at the Battle of Gravia under the leadership of Odysseas Androutsos, who, with a handful of men, inflicted heavy casualties upon the Turkish army.

The revolution on Crete

The revolution was not successful in Crete in the first years as the Turkish authorities had the help of Egypt. The Cretans revolted many times through the years but the Egyptians always managed to repress them. Crete was finally liberated in 1897 and it remained an Autonomous Principality under Prince George of Greece. The union of Crete with Greece was achieved on December 1st, 1913.

Τhe fall of the Messolonghi (April 1826) revived the philhellenic movement in Europe and the Greek uprising took on international dimensions. The Great Powers got involved and their help was decisive especially in Navarino naval battles in October 1827. Before their intervention, the Revolution was threatened with collapse because the Greeks failed to prevent the capture and destruction of Kasos and Psara in 1824 or the landing of the Egyptian army at Methoni.

On 31 March 1827 the Trizina Assembly began its work, drafting a new constitution and offered the presidency of Greece to the former Russian foreign minister, Count Ioannis Kapodistrias. Kapodistrias arrived in Greece to become the Governor on 28 January 1828. The first task of Greece's new leader was to create a state and a civil society. So, the Greek nation was established and Greece was finally present on the political map of the world. Many great battles were fought (in Dervenakia, Gravia, the naval battle of Spetses and many more) and many personalities emerged that we admire and are grateful for because thanks to them we can live the life we want today. Women also played an important part and the most known are Laskarina Bouboulina and Mado Mavrogenous. Nevertheless, known or lesser-known, everyone contributed to the success of the revolution. Freedom or Death" was the motto during the Greek Revolution against the Ottoman Empire. It is believed that the nine lines of the flag reflect the number of syllables in the Greek phrase "Eleftheria i Thanatos" (the translation of Freedom or Death). The line pattern was chosen because of its similarity with the wavy sea that surrounds the shores of Greece. The interchange of blue and white colours makes the Hellenic Flag on a windy day look like the Aegean Sea. The Greek Square Cross that rests on the upper left side of the flag demonstrates the respect and the devotion that Greek people have for the Greek Orthodox Church and signifies the importance of Christianity in the formation of the modern Hellenic Nation. During the dark years of the Ottoman rule, the Greek Orthodox Church helped the enslaved Greeks to retain their cultural characteristics: the Greek language, the Byzantine religion and generally the Greek ethnic identity.

This year, the entire world will turn Greek to mark Greece’s bicentennial, commemorating 200 years since the declaration of the War of Independence. In every corner of the globe where members of the Greek Diaspora are present, the anniversary will be marked. Iconic landmarks in all of those countries will be illuminated in blue and white in honour of the Greek people and their struggle for freedom 200 years ago.