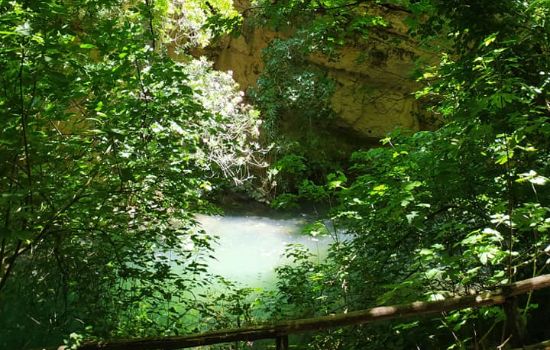 At ‘Astrakiano Gorge’, north of the Astrakoi Bridge, there is the cave called Neraidospilios. According to archaeologist Paul Faure, this was the sanctuary of Tritogeneia Athena. This adjective is due to the ancient Greek name of the River Karteros, i.e. ‘Triton’, who was born in the sanctuary of the goddess.

In the cave there is one of the springs of the Astrakoi aqueduct, which supplied part of the water necessary for the city of Heraklion in the beginning of the 20th century. Legend has it that this cave, deeply set in the gorge with its numerous springs, clear running waters and lush vegetation, had been chosen by the Fairies (neraides, ancient Greek mythology Nereids) as their home! One night, a young lyre-player, heard their song and his curiosity led him to the cave. He saw the fairies there, dancing and singing bathed in light and dressed in transparent veils!

Enchanted by the sweet melody in the air and their dance, he picked his lyre and accompanied their dance.