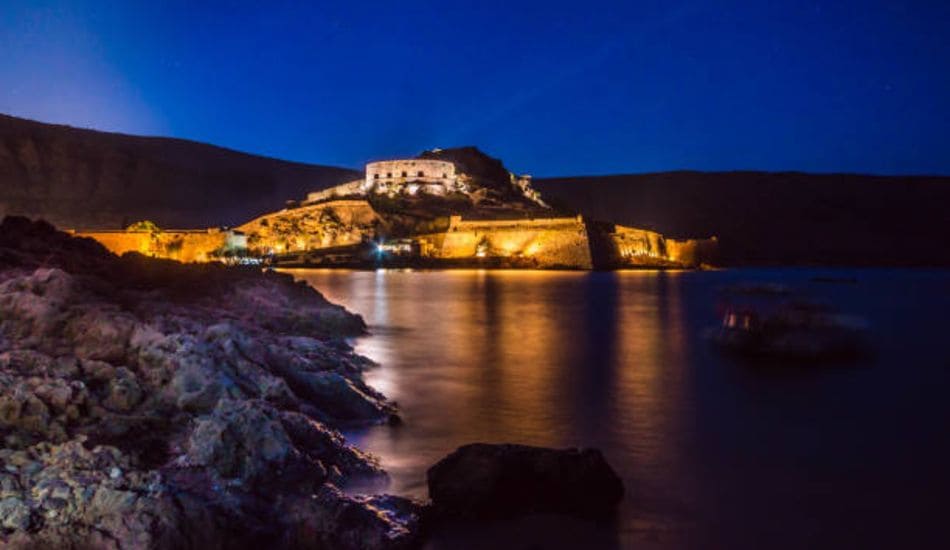 Spinalonga-island, is an island located in the Gulf of Elounda in north-eastern part of Crete, in Lasithi, next to the town of Plaka. Is definitely a must see place on Crete. The island has a rich history starting from ancient times. Due to its strategic position, it was fortified and through the times it had different uses.

From the early years, it protected and guarded the port of Ancient Olous (city of ancient Crete -  it was situated at the present-day town of Elounda). Olous grew into a major city of northeast Crete, with an organised sanctuary, an important harbour and its own coinage. A large part of it is now underwater. Olous is reported by Homer in his writings among other ancient Cretan cities.

Spinalonga flourished until the 8th century A.C. At that time fear of Arab pirates in the Mediterranean made the citizens move inland for more safety. The decline of the region stopped when Venice occupied Crete (1211-1669).

The Venetians were excellent merchants and they quickly recognised the value of this natural port. They harvested salt from the salt pans they created around the island. They also used it for trading regional agricultural products. Because of piracy and the expansionist aspirations of the Ottomans they had to improve the existing defence facilities. The new fort was built in 1579. The fortifications incorporated ruins from the walls of the ancient city. It was actually a fortress island with a fortification complex consisting of double rows of high walls and towers. It possessed great firepower with 35 cannons. This was the reason why it was never occupied. Today, the biggest part of it is maintained and it is considered the most important sea fortress in the Mediterranean.

After Heraklion was occupied by the Ottomans (1669), Venetians managed to keep Spinalonga until 1715 alongside Gramvousa and Souda with the hope that someday they would reoccupy Crete. Until it was surrendered to the Ottomans it was used as a refuge for the Christians they wanted to be saved.

During the Ottoman rule, the island was inhabited by purely Turkish families due to the security of the fortifications. Merchants and sailors used this security to control the trading routes of the Eastern Mediterranean. When Crete became autonomous in 1898 the island was largely abandoned. The last Turks left in 1903 in order for the island to become a leprosarium until 1957.

During the Second World War, the Germans supplied the lepers but did not dare to install a guard which gave the sick people the freedom to listen to radio stations from Cairo and London, a thing that every occupied city was not allowed to do. The Hansenians had created a quirky society with their own rules and values. Despite their sickness and social marginalization, they continued to work, get educated and live with dignity until 1957. We can take a glimpse of how the lives of the lepers were from the famous novel The Island by Victoria Hislop, a historical novel that was later made as a tv series.

In 1970 a protected archaeological site was declared. Τhe buildings of the leprosarium were demolished and the excavations and maintenance of the walls began. Under the auspices of the Ministry of Culture, the rescue and maintenance works of the Venetian fortifications and other buildings continue to this day. Efforts are being made to include it in the list of  UNESCO’S World Heritage Sites.

Where is located Spinalonga?

Spinalonga, is known as the island of the living dead, The island of tears. An island located in the Gulf of Elounda in north-eastern Crete. Elounda is easily accessible with your car by the national road. 45 min from Heraklion and 10 min. from Ag.Nikolaos. You can catch a boat to Spinalonga not only from Elounda but also from Agios Nikolaos or Plaka.

In the summer season, Spinalonga is visited by many tourists. You can catch a boat from Agios Nikolaos, Elounda or Plaka or if you visit it in wintertime you can ask for a boat from the locals in the tavernas in Plaka as many of them own boats for fishing or their own pleasure. Do not to miss one of the most important/famous sites in Crete.

Rent a car and drive to Elounda

To rent a car is the best way to explore Crete, for travellers who prefer to make their own itinerary. Many interesting villages and settlements, Cretan beaches, monuments, archaeological places, picturesque villages, breathtaking views, cosmopolitan cities and reveal the magnificent of Crete. Might be more tired but also more rewarded toο.
Our local car rentals offer affordable car rental rates for all vehicles.

You can collect the car directly at Chania airport or at Heraklion airport ( HER) so you can get on the road at once. Alternatively, if you are arriving by boat, a rented car can be brought to you when you disembark in Souda Port or Heraklion Port.

Choose from luxury and economic vehicles and enjoy a car from a quality car fleet, all protected by fully-comprehensive insurance policies and equipped with different amenities to help make your trip more comfortable. You can easily book a vehicle online using our website, or by calling us at (+30) 6970980918. ( What's app & Viber) Visit and choose one of our cars.

Take a boat cruise to visit the beautiful Spinalonga fortress dating from the Venetian period. Cruise in Mirabello Bay and swim in the clear waters of Elounda beach.

Places to visit near Spinalonga

Elounda is different from most resorts in Crete. Although Elounda is known as a luxury resort, the audience is not just made up of high earners. Hidden away on the eastern coast of Crete, Elounda is a pretty fishing village that is the perfect destination for a relaxing seaside getaway. You'll love Elounda if you're looking for a traditional Greek resort that isn't too crowded or commercialized. However, that doesn't mean there's nothing to do here.

The Kolokytha beach is an insider tip that is becoming more and more popular. To get here, follow the road from Elounda, past Olous to the Spinalonga peninsula and then follow the off-road road until the road finally ends at the chapel of St. Luke. Even if you can't see the beach from here, it's only a few minutes downhill on a narrow footpath and you reach Kolokytha Beach. The small beach consists of fine sand and the water is always very calm and shallow. The colours of the water range from blue to turquoise and the beach is perfect for snorkelling. It got its name from the island Kolokytha (zucchini) on the opposite side. Kolokytha Beach is a dreamlike beach,

A feature of Plaka is the wonderful views of the island Kalydon, where the famous fortress of Spinalonga stands. Spinalonga operated as a leper hospital during the first half of the 20th century. Plaka existence is highly linked to Spinalonga, as the settlement was built for serving the leper colony.

Today, in Plaka you will find several traditional taverns and lovely old houses, which give you the impression that time has stopped here 2-3 centuries ago. Indeed, this picturesque place was the ideal place for filming one of the most amazing TV series of Greek Television, called “The Island” (2010).