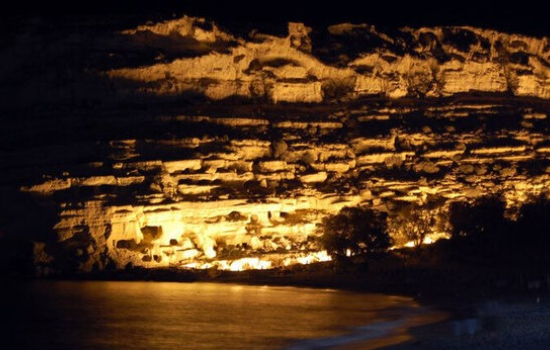 Matala is about 66 kilometres from Heraklion airport (HER) and is taking a 1-hour drive. Is taking approximately 2 hours 20 min drive from Chania international airport (SKQ) and 140 km.

Matala is one of the most popular tourist destinations of Crete and certainly the most famous beach of south Heraklion prefecture. It is located close to Phaestus, the second largest palace of the Minoan civilization. Matala served as a port of Phaestus, first, and on the Roman Times, it became a port of Gortys too.

The beach is very well organized with umbrellas, toilets, showers, lifeguards, first aids, beach volley courts, snack bars, water sports, excursion boats, a camping site, etc. Around Matala, you will find many options for accommodation, entertainment and eating. In the evenings, the bars on the beach are full of many people, both locals and foreigners. Especially in June, the internationally renowned Matala Festival takes place. Next to Matala and just 800m south of Matala famous resort, you find the Red Beach (Kokkini Ammos). To get here you have to walk a trail that begins north of the settlement of Matala and crosses the hill Kastri north of Matala. You have to climb some rocks and in the final meters you have to descend a steep cliff, but it’s not particularly difficult. After walking 30 minutes from Matala, you will see the magnificent Red Beach from above. Be sure to carry refreshments for the walk and for your supplies for your day at the beach. The beach still remains nudism-friendly (especially its northern part). Indeed, the beach has been voted as one of the top nudism-friendly beaches in the world. Moreover, the Red Beach and its surrounding area is protected under the Natura 2000 international program.

Τhe artificial caves in the cliff of the Matala bay were created in the Neolithic Age. Matala was the port of Phaistos during the Minoan period. In the year 220 BC, Matala was occupied by the Gortynians, and during the Roman period, Matala became the port of Gortys. It has been suggested that the caves were once used as tombs, but it is more likely that they were used as living spaces, given their volume (corpses do not need that much room to walk around). One of the caves is called "Brutospeliana" because according to the legend it was frequented by the Roman general Brutus.

Matala was then a fishing village. In the 1960s, the caves were occupied by hippies who were later driven out by the church and the military junta. Matala is now a heavily overbuilt tourist destination relying on coach tours and summer visitors. There are many gift shops and bars. Matala's hippie history relives during the 3 days Matala Beach Festival every July (since 2011).

Phaistos is located southwest of Heraklion, at a distance of 62 km, at an altitude of 100 meters, south of the river Geropotamos and the ancient Litheos. The view of the hill is panoramic and is surrounded by the imposing mountains of Psiloritis, Asterousia and Lassithi mountains, while a short distance is the town of Tympaki. Economic, administrative and religious centre, it supervised the fertile plain of Messara. The ancient ports of Matala and Kommos were under the control of Phaistos.

The first reference to Phaistos is made by Homer in the Iliad [3] and the Odyssey, where he mentions Phaistos in the list of cities that participated in the Trojan War and describes it as a city " εὖ ναετοώσα ", well inhabited.

The Phaistos Disc (also spelt Phaistos Disk, Phaestos Disc) is a disk of fired clay from the Minoan palace of Phaistos on the island of Crete, possibly dating to the middle or late Minoan Bronze Age (second millennium B.C.). The disk is about 15 cm (5.9 in) in diameter and covered on both sides with a spiral of stamped symbols. Its purpose and its original place of manufacture remain disputed. The disc was discovered in 1908 by the Italian archaeologist Luigi Pernier in the Minoan palace-site of Phaistos and features 241 tokens, comprising 45 distinct signs, which were apparently made by pressing hieroglyphic "seals" into a disc of soft clay, in a clockwise sequence spiralling toward the centre of the disk.

Don't miss a visit to Matala-beach and the surrounding area. Enjoy the crystal clear magical waters. A trip for all with tons of magical sea views and wonderful landscape. You can combine it with a short visit at Phaistos,  For alternative tourism choose Komos, Kalamaki 2 nice small holiday villages with beautiful beaches promenades in the south of Crete and red beach in case of nudism.

How to go to Matala

By car is the best way to explore Crete, for travellers who prefer to make their own itinerary. Many interesting villages and settlements, Cretan beaches, monuments, archaeological places, picturesque villages, breathtaking views, cosmopolitan cities and reveal the magnificent of Crete. Might you will be more tired but also you will be more rewarded too !!

Visit and choose a car.