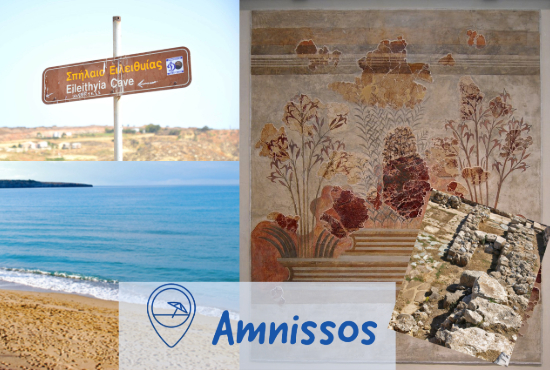 Amnissos is an ideal place to collect your rented car and start your tour around the island to discover and explore the magnificent of Crete.

Amnissos is 7 km east of Heraklion the capital of Crete (Iraklion) on a beach used for recreation by the citizens of the modern city. In the ancient times it used to be the port of Knossos in the Minoan times and from there sailed the Cretan ships that took part in the Trojan War.

The beach overlooks the islet of Dia, which was a significant Minoan religious site. Another ancient religious site close to Amnissos beach is the Cave of Eileithyia, where, according to the myth, Hera gave birth to Eileithyia, the goddess of childbirth. The cave is long and narrow, yet open to the public.

It is a beautiful, sandy beach with nice, clean waters. In summer, this beach gets very crowded because it is well-organized with water sports facilities, sunbeds, umbrellas, showers and seaside fish taverns.

There is also a lifeguard for the swimmers' protection while the beach is often affected by northern winds. A lot of hotels and rooms to rent are also found close to Amnissos beach.

The archaeological site of Amnissos is located at Karteros village, 7.5 km east of Heraklion at the foothills of the Paleochora hill. It is an ancient city, which, according to the geographer and historian Stravon (64BC – 24AD), was used by King Minos as the port of Knossos and is another example of Greek civilization. In addition, some archaeological excavations have revealed some Neolithic settlements in the surrounding area and a villa that dates back from 1600 B.C. and whose beautiful frescoes are displayed in the Archaeological Museum of Heraklion.

During the Archaic Period, in the 7th century BC, the sanctuary of Zeus Thenatas was built at the western foothills of the hill as documented by inscriptions of the Hellenistic and Roman times. It is the only part of Amnissos in which there was a building activity after the destruction of Knossos and remained in use until the 2nd century AD.

The monument was seriously damaged by the German soldiers during the Second World War.

Places to visit near

Amnissos is not far away from Creta Aquarium, Dinosauria, Knossos Palace and only 7 kilometres from Heraklion and one of the best place for relaxing holidays.

Kokkini Hani is a coastal tourist resort, 14 km east of Heraklion and about 2 klm from Amnissos, which is part of the Hersonissos Municipality. The inhabitants are primarily engaged in tourism and agriculture. The tourism sector has grown rapidly in this area over the last decades. There are supermarkets, seasonal shops, cafes and taverns on the main road that passes through the village. Kokkini Chani is one of the most famous resorts of Crete with modern luxury tourist units while there are all categories of accommodation, furnished apartments and many rooms for rent.

The Cave of Eileithyia in Heraklion Crete: The cave of Eileithyia is approximately 1 km to the south of Amnissos beach. It took its name after a mythological goddess, who was said to protect pregnant women and help them to have a painless delivery with no complications. Moreover, the tradition says that goddess Eileithyia was born by Hera inside this cave. In fact, this cave was the most important worshipping place dedicated to this goddess, especially during the Minoan times.

The cave extends for over 64m and has an entrance to the east side. Once inside, there is a rectangular anteroom and a rectangular sort of altar surrounded by some stalagmites with a cylindrical shape. There is also a courtyard outside, which was probably used for ceremonial activities.

An interesting detail about this cave is the many objects that were uncovered, which prove that it was continuously used during a long period of time, that goes approximately from the Neolithic period to the early Christian era, around the 5th century AC. In fact, some buildings from the 14th and 13th centuries BC were also discovered in the area, which apparently housed the priests of this worshipping cave.

Karteros is a popular beach and a small town near Heraklion, the capital of Crete. No beach is closer to the big airport of Heraklion. From the beach, you can observe the last kilometres of the landing approach of the airplanes. To the centre of Heraklion, it is about 5 kilometres from Karteros.

In the village of Karteros on the Old Road you will find several cafés and restaurants as well as a good bakery and supermarkets. There are some smaller and bigger hotels, but Karteros is not one of the big holiday resorts on Crete. Sights in Karteros are not known to us. The village is very small.

From Karteros you can see the big island Dia, which is only 7 kilometres away from the beach. It is by far the largest island in the surroundings of Heraklion. The island is uninhabited. Dia is 6 km long and 4 km wide (about 12 km² area). There are always summer excursion boats to Dia. These do not sail from Karteros, but mainly from Heraklion and Gouves

Various protected animals and plants live on Dia. These include the wild goat Kri-Kri, a lizard (a subspecies of the Cycladic wall lizard), a rare snail, a subspecies of the rabbit and a rare thistle (Eberwurzen-Art Carlina diae, endemic to Crete and some small islands such as Dia). On Dia, there is a tavern for the guests of the boat trips of Crete. It is not possible for tourists to stay overnight on Dia Island.

Renting a car is not only the easiest way to get to Amnissos, it’s also the best way to explore the region. Crete is full of stunning drives. Having a car gives you plenty of flexibility. Rent your car here

Thank you for reading our article.